The Tasmanian Devil is a voracious carnivore. It eats prey to survive. The prey has little choice against such a predator. But most humans do have a choice in life – decisions to be made. 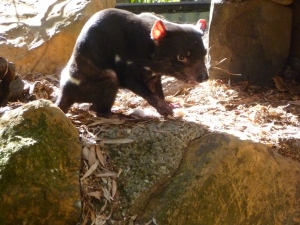 Few people die wishing that they had spent more time at work. Aspirational mantras about the virtue of honest toil or hard work is the way to salvation are part of the same power culture which suggested that idle hands are the Devil’s workshop. Exhausted powerless toilers were presumably too tired to think of other ways, or to challenge the status quo. Meanwhile, those who were born to make the rules had plenty time for idleness. Not for them the hours of back-breaking work. Rather, they could engage in social pastimes of cultural or cerebral skill; debating, law making, networking, travel and exclusive clubs – while spruiking about their sterling selfless service to society.

That is the nature of the social orders such as feudalism, the caste system,  the slave trade or, in more modern times, the class system in Australia, pyramid selling, charismatic cults or some international corporations. Know your place! That is the great Con. The few are using the many as pawns in a huge chess game. (Read The Chess Board)

Leaders can only lead when others will follow – the corollary of born to lead is born to follow. There is no problem with different roles in life as long as they are seen for what they are. Being educated and free to think for yourself are the keys to being aware of the world around and how it works. Wide reading and critical listening are great assets.

Are all people born equal? Clearly, they are not – not in the real world, rather than the aspirational world. There are huge disparities. The powerful maintain their power by fear or peddling hope or manipulating representative processes to their advantage. But the old systems are falling apart. The old economic models no longer work for a world approaching 8 billion people, with ecosystems straining. New sustainable economic models are emerging – new paradigms. But change doesn’t come easily to those who would stand to lose a comfortable lifestyle and a hold on power, by changing.

Continuing to cling to the belief that only free markets and nation states will resolve our current dilemmas is naïve. We need to recognise reality as it is – not as it once was. With the right political, legal and economic structures and institutions in place, the convergence of technologies can promise meaningful work, leisure time, prosperity and freedom for all – quote.

The imbalance needs to be redressed by, at least, flagging the problems and the solutions to those who make the rules. On the other hand, the Bourbon French King Louis XVI and the Russian Romanovs didn’t see it coming either. Nor did many others who didn’t understand equity – or that power manipulated by an elite rarely lasts, in the modern era. It is less painful if it is done by honey rather than vinegar! Check your history. Do your own research! Am I conning you?