Available on Amazon – paperback and ebook. Now on Kindle, Kobo, Nook and others as an ebook.

When Napoleon is crowned King of Italy in 1805, a gypsy claims his troops have stolen a precious sapphire from her family. The gypsy curses Napoleon, predicting a future where he will be stripped of his power and banished from society.

Fast forward 200 years. Journalist, Alison Wood reports on a sapphire theft in the Queensland gem fields. Again, a curse is proclaimed against the perpetrator.

Enter Steve Flynn, ex-armed forces turned security guard, who nearly dies when his celebrity employer’s yacht is attacked by pirates near Fiji. Why is the investigation into this crime stymied by the ‘powers-that-be’? 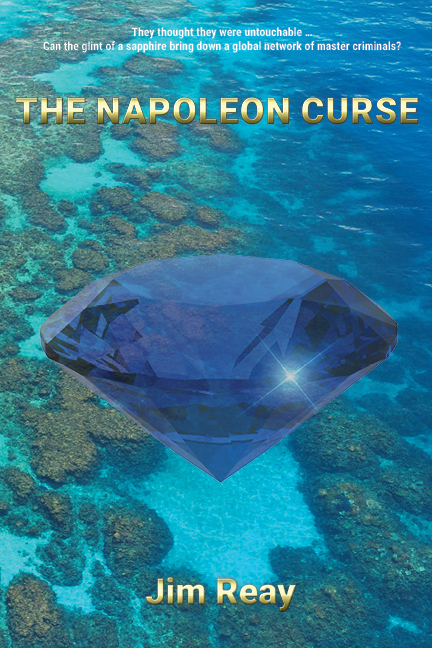 And who is behind Ramas – an organisation responsible for a network of insidious crimes? Is it the enigmatic, Napoleon-like Roger Cavanagh with his fascination for sapphires? Or does the answer lie somewhere in the past, in the world of high finance and the upper echelons of society.

When the UK and the USA set up a powerful independent agency to expose the underhand dealings, they enlist the help of the Australian Federal Police to trap the criminals. Alison and Steve find themselves embroiled in a dangerous mission involving intimidation, grand theft, murders and matters of national security.

Get ready for adventure on the high seas with The Napoleon Curse. Its multiple storylines, cast of engaging characters and fast-paced action is sure to keep you enthralled until its satisfying conclusion.